So, Radar is our oldest pup – he will be four this August. I usually bathe him and groom him myself – except for trimming his claws. He hates his feet being touched. So I “outsource” that duty and take him to the vet to have them deal with it.

Being that it is Mother’s Day weekend, I thought, hey! they can just give him a bath while he is there. Fluffy and soft and perfectly clean. With trimmed nails to boot! That’s how your dog should be -clean- if you plan on popping in to see your mom. It’s all about manners with her, isn’t it? So off the the vet we went.

When Kevin came home from work yesterday and picked up Radar, he said “uhhhhh, why does the dog smell like a perm”?? Hmmmm. I hadn’t really noticed that smell, but soon realized that he DID smell like a perm. Can I get a show of hands from people who A) have had a perm B) have had a BAD perm C) have had their hair burned off from a perm D) all of the above. We’re talking the 80’s, so don’t act like you didn’t have one.

So how does that work in the “idea” boardroom when people were sitting around a table and someone thought that shampoo that smells like a PERM would be a great idea? It was such a pleasant scent back in the day, why not?

Ahh, the decision makers. I could really go on and on and on about this. I won’t. Wait, I WILL mention one that was like, whaaaat? The poo emoji. Who was at THAT table and said, HEY! lets make an emoji that looks like dog poo! yeah! yeah! and then someone chimes in and says, YEAH! that’s a SUPER idea! and let’s put a SMILEY FACE on it to make it CUTE!! People will LOVE that! And so it goes….

What was my point? How do I tie this in to what I am wanting to share today?

I looked up permanents and how they actually strip down the hair strands with heat and chemicals. I won’t get too science-y, because well, I’m not “science-y”. What I did determine is this, new growth is where the healthiest hair is found. You have to let the damaged stuff grow out and nurture the new hair coming in. You can put all the conditioner on the old hair that you want, but it’s just nourishing the old stuff. It’s not getting to the roots. The actual change doesn’t happen until you see new growth.

I had no idea where God was going to lead this whole 80’s perm conversation. I am learning and absorbing things right here as I write.  In order to replenish your hair with nutrients after the damage has been done, you MUST nurture it and wait. This requires patience and trusting that the new hair IS coming. With any luck, maybe your NEW hair will come in curly. Then you can straighten it…. it’s always something.

It’s not Thursday, but I’m throwing this way back! This was in 2010 and I made that sign for some KLOVE contest or something. Marley was my constant sidekick (for 12 1/2 years). My hair grew back so curly after my first chemo round. It settled down after awhile, boy was that new growth healthy… 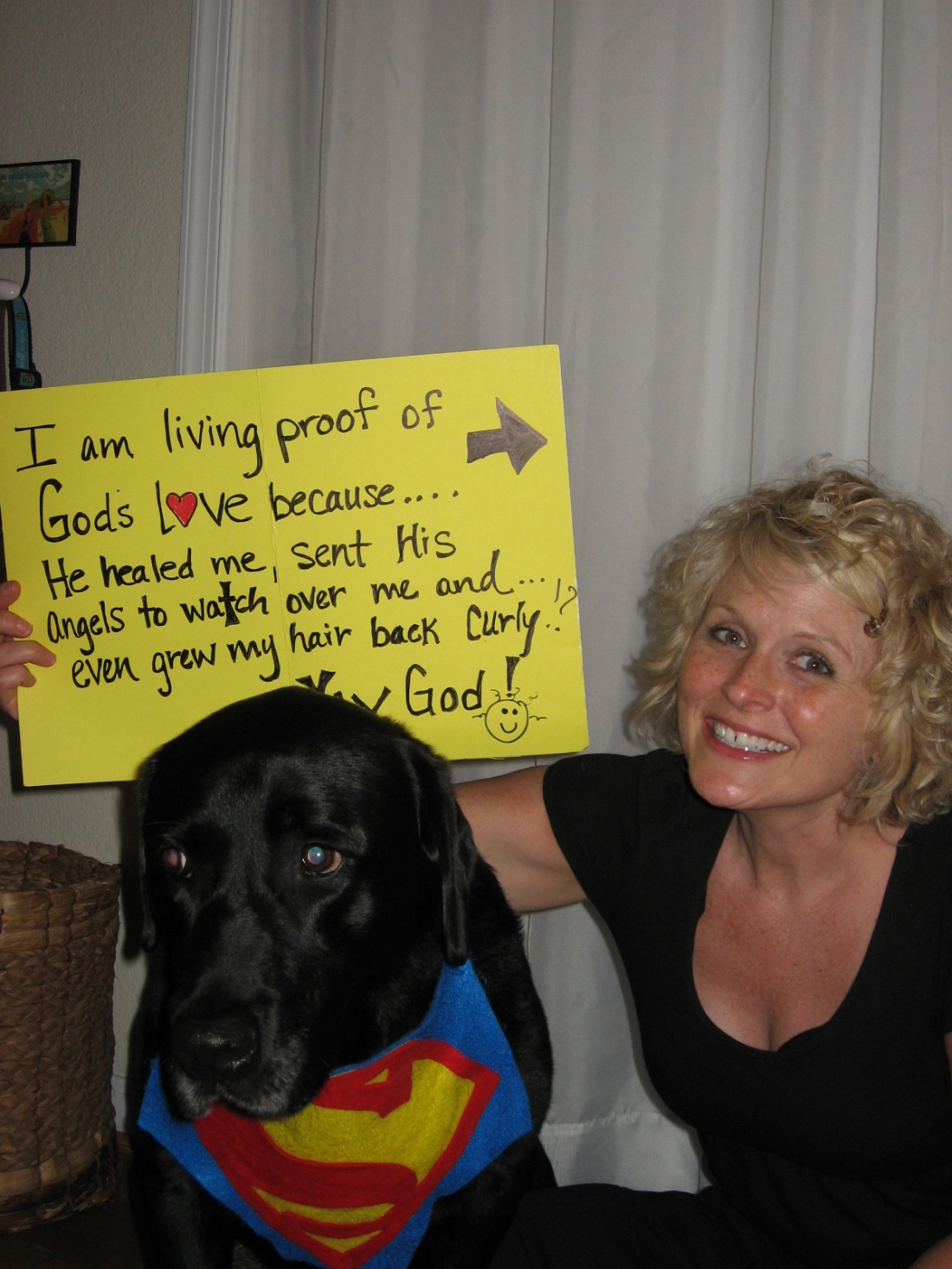